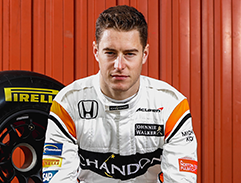 The race was started in rainy conditions, which contributed to a Turn One accident that left a fast-starting Fernando Alonso with significant damage to his car. Despite soldiering on for a couple of laps, the car was too badly damaged to continue and Fernando was forced to retire.

Stoffel took avoiding action to miss the first-lap crash, but was able to consolidate his position inside the top 10. He always looked competitive on-track whether running in the wet or dry, and was set to challenge for the top six until being delayed during a slow pit-stop on lap 27.

Seventh was a solid reward for both his and the team’s efforts all weekend.