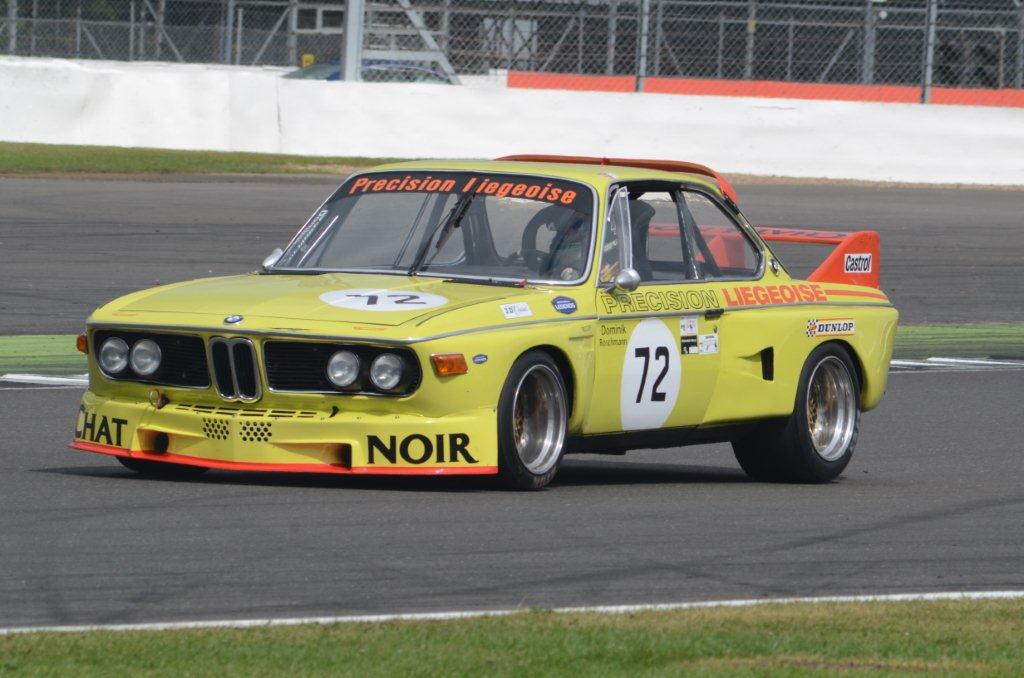 Wilson attempted to break the slipstream and scamper off in the distance, but Hibberd had other ideas, closing the gap to Wilson and then passing for the lead at Stowe halfway through the 20-minute race.

Further back, Martin Walford treated fans to the sight of the ex-Peter Arundell Lotus 22, which won 18 of the 25 races it entered in 1964, but most eyes were firmly fixed on the duelling duo up front.

Seeking a double success, Wilson fought back to reclaim the lead and nothing separated the pair as they slipstreamed each other around the final few laps.

Hibberd looked every which way to try and find a way past Wilson who calmly kept to his line and held on for the narrowest of hard-earned victories.

The first of the touring car races on Tin Top Sunday was a 50-minute showdown for a 40+ car field of U2TC saloon cars – the grid packed with Lotus Cortinas, Alfa GTVs, BMW 1800Tis and Mini Coopers.

With Cortinas to the fore, pole man Andy Wolfe made the best start and, as Neil Brown and David Cuff battled for second, Wolfe built up an astonishing five-second advantage after the first lap.

Mark Sumpter in another of the Cortinas, and the Andrew Banks Alfa Romeo Guilia Sprint, joined the battle for second and faced some very robust defending; Banks being forced onto the grass at Farm before making light contact with Sumpter.

The first of the leaders to pit was Brown, handing over to Fortec Motorsport owner Richard Dutton, followed by Cuff who gave way to touring car legend Steve Soper. Soper set after Dutton for second place and eventually used his experience to pressure the rival Cortina, nipping by when Dutton ran wide. All his hard work, though, came to nothing when his car rolled to a halt on the final lap.

Ahead of the drama, Wolfe had handed over the leading Cortina to Richard Meaden who took a dominant victory.

The day’s second Tin Top race was an exciting new addition to the Silverstone Classic bill – the Historic Touring Car Challenge, featuring a 50+ grid of Rovers, BMWs, Capris and other familiar favourites from the seventies and eighties. The field included a number of notable drivers including 2012 World Touring Car Champion Rob Huff, BTCC race winner Jeff Allam and Patrick Watts in one of three MG Metro Turbos.

Fresh from winning the U2TC encounter, Richard Meaden took his 1974 Ford Capri into an early lead, ahead of Nick Whale in the much more modern 1990 BMW M3.

Meaden handed over to Grant Tromans in the mid-race pit-stops, the Capri coming out just ahead of Harry Whale who had replaced his father in the M3. After some brave resistance, the BMW finally passed the Ford in a bold move around the outside at Abbey to assume a lead they were never to relinquish.

The second of the fantastic 25-minute races for 3-litre Formula One cars of the period 1966-1985 kicked off the afternoon’s proceedings, with yesterday’s race winner Nick Padmore on pole in the Williams FW07C.

28 cars – all still in evocative period liveries – took the start, shaking the earth on the Silverstone pit straight and filling the air with the roar of DFVs and a lone Matra.

Once again it was Ollie Hancock who made a demon-like start in the Fittipaldi F5A, leading from fourth on the grid. Padmore tried to pass into Brooklands as he had done successfully on Saturday but this time Hancock held on gamely, despite the Williams crawling all over his gearbox.

Padmore wasn’t to be denied, though, and made a great move around the outside of Village at the start of lap two to take the lead, while the Tyrrell 010 of Loic Deman made its way on to the back of the brewing battle for second.

With the Fittipaldi holding up a train of cars, fans were treated to a truly astonishing race-long spectacle as six cars squabbled for runner-up honours. The JPS Lotus 91/5 of Greg Thornton and Deman’s Tyrrell were swapping places behind Hancock but neither was able to get past the heroic Fittipaldi. They were quickly joined by Martin Stretton’s Tyrrell 012 and Christophe D’Ansembourg’s Williams FW07 before the two of them made contact at Brooklands; with the latter spinning down the leaderboard. Then, as Stretton recovered, Rob Hall, aboard the ex-Jacques Laffitte 1981 Austrian Grand Prix winning Ligier JS/17, also joined the high-speed train.

On the penultimate lap Hancock, Deman and Stretton went three-wide into the loop, somehow coming back out in the same order but Hall squeezed past Stretton at Brooklands.

A furious final lap saw Deman first pass Thornton and then the gallant Hancock to grab a last gasp second. In the confusion Hall also slipped by the Lotus to grab fourth.

Incredibly, as the cars flashed past the chequered flag little more than a single second covered the second to seventh place finishers in what will go down as one of the most breathless and thrilling races ever staged at the Classic.

The third of Tin Top Sunday’s headline races was predominantly for mighty V8-engined US muscle cars from the sixties with a good splattering of giant-killing Lotus Cortinas and Mini Coopers adding to the entertainment.

Leo Voyazides’ fast-starting Ford Falcon spun at the first corner and as the dust settled it was the two Ford Mustangs of Sean McInerney and Craig Davies that were tussling for the lead.

Wills rose to second when the Falcon also retired, but the Cyclone came under increasing pressure in the closing laps from the hard-charging Lotus Cortina shared by Andy Wolfe and Michael Ganns – the V8 power ultimately keeping the American muscle car ahead.

After bringing Saturday’s action to a close, racing into the dusk and evoking memories of iconic races at Le Mans, Sunday’s second race for Group C prototypes harked back to some of the renowned endurance showdowns at Silverstone from the end of the last century.

Nathan Kinch, dominant winner the previous evening, led from pole in the wonderful sounding Lola T92/10 with its Judd V10 engine, but sadly retired on the opening lap.

Bob Berridge happily assumed the lead of the race in the yellow Nissan R93CK, ahead of another Nissan, the R90CK of the speedy Katsu Kubota and Robin Ward’s Spice SE90C.

Mark Sumpter soon set his sights on the third-placed Spice and maximised the turbo power of his Porsche 962 to overhaul the Spice. The day then improved further for Sumpter when Kubota spun his Nissan promoting the Porsche into second place.

The fourth and final Tin Top Sunday showdown starred the much-loved Super Tourers from the nineties. The enthralling battle between the Vauxhall Vectra of Colin Noble Jnr and Honda Accord of James Dodd was one of Saturday’s highlights and there were high hopes of a repeat on Sunday.

Noble Jnr held the lead at the start, though Dodd was challenged by his father Graeme, in another Accord, this one a 1999 example raced by James Thompson in period.

Graeme soon fell back into the clutches of those behind however, as Jason Minshaw’s 5-cylinder Volvo S40 (Rickard Rydell’s race car from 1998) made its way past, but later ran wide at the Loop and lost a spot to Neil Smith’s ex-Stefano Modena Alfa Romeo 156. The pair then swapped places twice within the space of a lap as they duelled hard for the final place on the podium.

With Noble Jnr fending off Dodd so effectively yesterday, he seemed set for a second victory again, but a slight mistake with four minutes to go handed the advantage to the Honda.

The final lap was typical BTCC with the two pacesetters bashing doors all around the circuit. The pair were still side-by-side approaching the last corner with Dodd being somewhat rumbustiously forced off track and spinning across the kerbs. He recovered, though, to cross the line in second as Smith also found a way past Minshaw on the final lap for what looked like the final podium position.

Noble’s actions however would land him in hot water with the race stewards, and he was later excluded from the meeting.

From Tin Tops to classic Grand Prix machinery from more than half a century ago: the Silverstone Classic offers up a quite astounding array of historic racing cars.

Unfortunately, though, the second of the HGPCA races produced the weekend’s first red flag. Yesterday’s second-place finisher Jon Fairley stalled on the line and while a good portion of the grid missed the stricken Brabham, with such a large field contact was somewhat inevitable. The Kurtis of Fred Harper slid into stationary Fairley and set off a chain reaction, which eliminated a number of competitors.

The restarted race was held over a reduced duration of 15 minutes, with Will Nuthall in the Cooper T53 leading from Peter Horsman in a Lotus 18/21. Horsman quickly found his way past Saturday’s winner, the pair of them stretching away from Rod Jolley’s Cooper T45/51, but a driveshaft failure caused Nuthall’s retirement. This promoted Tony Wood in the unique Maserati Tec Mec into the final podium position, however he was caught on the final lap by Richard Tarling’s Assegai F1. But as Tarling struck, his car instantly slowed with a problem allowing Wood to claim third.

Tarling coasted towards the flag but his car agonisingly stopped just a few feet from the line. Defiantly, he jumped out and pushed it past the chequered flag to be classified in 19th place.

The closing showdown of an incredible weekend of motor sport was a fitting finale to the 2016 Silverstone Classic which, among a host of major milestones, was celebrating the 50th anniversary of the first-ever Can-Am race in North America.

The McLaren laid down big black marks on the tarmac as the lights went out, but Newall was unable to harness all of the power from the huge 8.8-litre engine and could only look on as Hall grabbed the lead.

Newall chased the Matra for the entire race and got alongside on a couple of occasions but the on-form Hall wasn’t to be beaten and took his third win of the weekend.

Behind the top two, John Grant’s McLaren M8C/D retired from third place with a rear-left puncture handing the final spot on the final podium to Michele Liguori in his Lola T292.