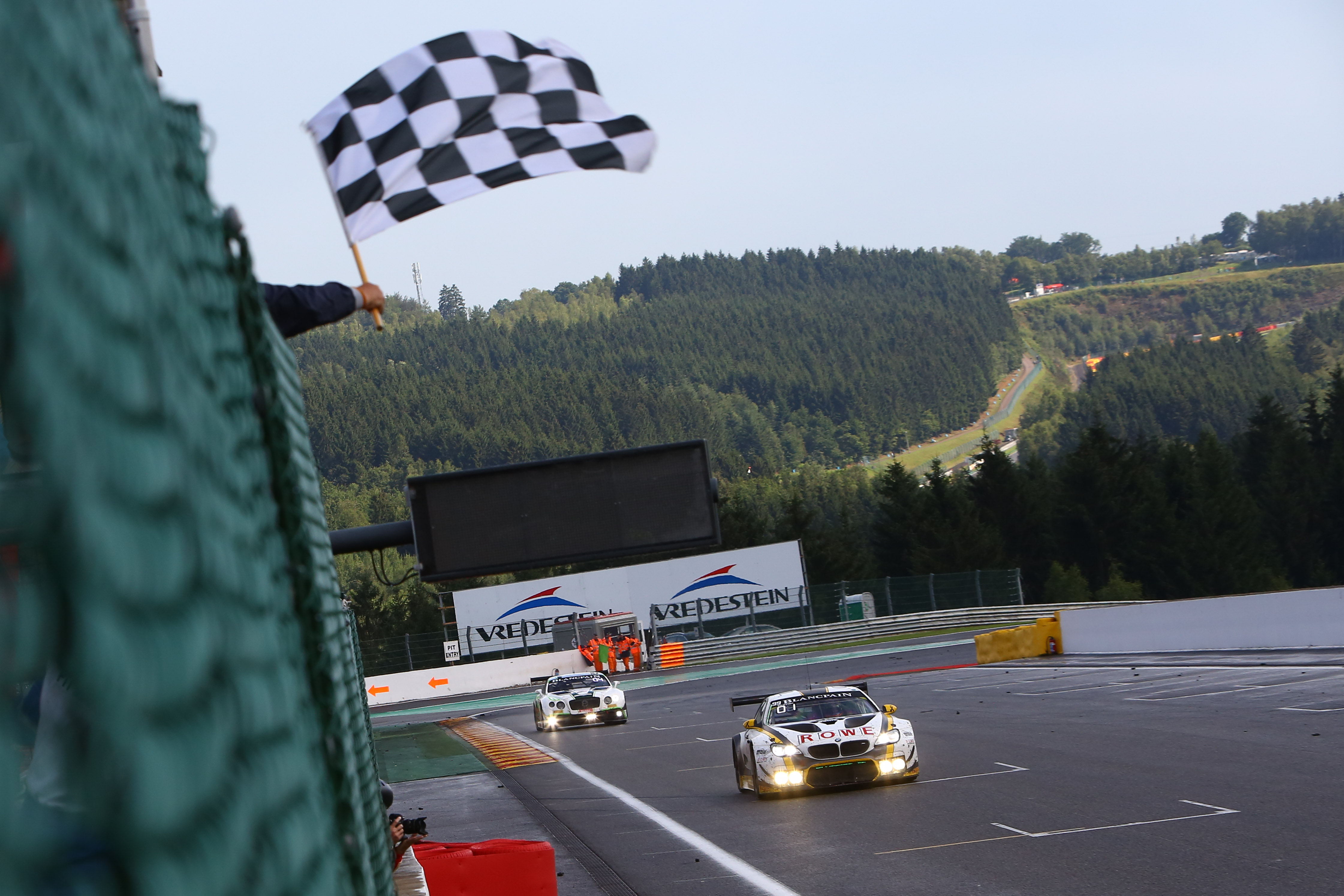 After back-to-back BMW victories: Four BMW M6 GT3s in action
at the 2017 24 Hours of Spa-Francorchamps.
• BMW record winner with 23 victories at the “Circuit de SpaFrancorchamps”.
• ROWE Racing travels to Belgium as defending champion.
• Tom Blomqvist and Nico Menzel set for Spa debuts.
Munich. The BMW M6 GT3 is ready for the next major challenge of the 2017 motorsport season: This weekend, the Ardennes region of Belgium provides the setting for the iconic 24 Hours of SpaFrancorchamps (BEL) for the 69th time. BMW has always enjoyed a close association with the event, which was first held in 1924. To date,
the Bavarian manufacturer has no fewer than 23 overall victories to its name, making BMW by far the most successful brand in the history of this race. In each of the past two years, the winning car has been a
BMW.
In 2015, the BMW Z4 GT3 was first across the finish line on its last big outing.
One year later, its successor, the BMW M6 GT3, triumphed on its debut at this endurance classic. After 531 laps of racing, it was Maxime Martin (BEL), Philipp Eng (AUT) and Alexander Sims (GBR) who emerged victorious for ROWE Racing at the “Circuit de Spa-Francorchamps”. True to the motto “never change a winning team”, last year’s three winners will be reunited at the wheel of the number 99 BMW M6 GT3 again at this season’s 24-hour race.
The number 98 ROWE car also features a trio of big names, with two DTM stars and a Spa winner: Bruno Spengler (CAN) returns to the 7.004-kilometre circuit in Belgium for the first time since 2015, when he was part of a very special motorsport project. The 2012 DTM champion shared the cockpit of a specially modified BMW Z4 GT3 with BMW Brand Ambassador Alessandro Zanardi (ITA) and Timo Glock (GER). This is Spengler’s third 24-hour race of the year, having driven John Baldessari’s (USA) BMW M6 GTLM Art Car in Daytona (USA) and a BMW M6 GT3 at the Nürburgring (GER). He will be joined by DTM colleague

Tom Blomqvist (GBR), who came home fourth and narrowly missed out on a podium finish with BMW Team Schnitzer when the team made its 24-hour comeback at the “Green Hell” in May. The Englishman is making his debut at the marathon in the Ardennes. The trio is completed by Nick Catsburg (NED), who triumphed at Spa-Francorchamps in 2015 alongside Markus Palttala (FIN) and Lucas Luhr (GER) in a BMW Z4 GT3.
Another driver making his first appearance, at what is probably the biggest GT race in the world, is BMW Motorsport Junior Nico Menzel (GER). He will alternate at the wheel of the #35 Walkenhorst Motorsport BMW M6 GT3 with Palttala, Christian Krognes (NOR) and Matias Henkola (FIN). The second Walkenhorst car will be driven by Henry Walkenhorst (GER), Stef van Campenhoudt (BEL), David Schiwietz (GER) and Werner Hamprecht (GER).
In total, 66 racing cars will line up on the grid at this year’s 24 Hours of SpaFrancorchamps
on 29th /30th July.

The BMW drivers will exit the pit lane for free practice at 11:50 on Thursday. That is followed on Thursday evening by the first highlight – the two-hour night qualifying. The top grid positions will be decided between 19:30 and 20:00 on Friday, when the fastest 20 cars from the qualifying sessions contest the Super Pole competition. The race is scheduled to start at 16:30 on Saturday. Twenty four hours later, the winners will cross the finish line at the end of the 69th edition of the endurance classic.
Quotes ahead of 24-hour race at Spa-Francorchamps:
Jens Marquardt (BMW Motorsport Director): “In addition to the 24-hour race at the Nürburgring, Spa-Francorchamps is one of THE highlights on the endurance calendar. The races in the Ardennes are always full of drama and are definitely not for the faint of heart as was the case in the previous two years, when BMW teams triumphed both times. We are optimistic that our drivers will be up there fighting for the top spots once again this year. We’ll see whether they will be able to do enough to get the third win in a row. It’s impossible to predict in
a 24-hour race. We are looking forward to a thrilling event, that will no doubt be another celebration of GT racing.”
Maxime Martin (#99 BMW M6 GT3, ROWE Racing): “When you come to Spa as the previous year’s winner, of course it is something special. A huge number of cars have the potential to win. The level at this race increases
consistently from year to year so, everything needs to run smoothly. Like at every 24-hour race, you also need a bit of luck but I think that we are in a very good position. We have a great team, a competitive car and the same driver pairing as last year. Bring on the race.”
Alexander Sims (#99 BMW M6 GT3, ROWE Racing): “I am really looking forward to Spa-Francorchamps and of course, we are returning with good memories of the win last year. However, this is a new year and we now fully focus
on the upcoming weekend. A 24-hour race is always a major challenge, but the team has already proved what it is capable of once again at the Nürburgring this year. We have a fantastic team and are highly motivated.”
Philipp Eng (#99 BMW M6 GT3, ROWE Racing): “Spa is one of the most well-known racetracks in the world, and in addition to the Nürburgring and Zandvoort, is the only one where drivers get an adrenalin rush two or three times
on each lap. We’re returning to Spa with the confidence of having already won the race once. Naturally, that calms the team a bit but the race will be extremely difficult once again, with around 60 cars at the same level; that was evident in the pre-test. The others didn’t hibernate over winter, but we also did our homework and sorted out a lot of things, which is why I am cautiously optimistic. Last yearwe did not make a single mistake despite the extremely tricky conditions, whichwas the key to success. In doing so we raised the bar a little bit for everyone
involved.”
Bruno Spengler (#98 BMW M6 GT3, ROWE Racing): “There is a lot of anticipation ahead of Spa-Francorchamps. It is a very difficult race; the level is high and there are a lot of cars on the track. A good result, or even the win would
be a dream. However, the races so far have shown that our rivals are very strong.
Naturally, it is impossible to predict how things will turn out at Spa. We definitely want to be up there at the front.”
Tom Blomqvist (#98 BMW M6 GT3, ROWE Racing): “I’m already a little bit excited; it will be my first outing at Spa-Francorchamps. I’ve already gained some experience of 24-hour races at the Nürburgring-Nordschleife, but the two tracksare very different. We have a great team. Bruno and Nick have a lot of experience.
We are in a good position and will give it our all.”

Nick Catsburg (#98 BMW M6 GT3, ROWE Racing): “I love SpaFrancorchamps, the event is fantastic. It’s great to be taking on this race alongside Bruno and Tom. They are terrific drivers and I am confident that we can get a good result together. It would be great if we could celebrate the third win in a row for BMW Motorsport at the 24 Hours of Spa.”
Markus Palttala (#35 BMW M6 GT3, Walkenhorst Motorsport):
“Together with Nürburgring, Spa is always the highlight of the year for me. It’s the biggest GT3 race of all and it’s my home race as I live in Belgium. In addition, it’s held on a great track. So it offers everything a GT driver can dream of and I’m looking forward to it a lot. It’s fantastic to race close to home and on one of the most beautiful tracks in the world. I think that with Walkenhorst we have one of the strongest packages in the Pro-Am class and our clear target is to claim a podium finish or even the win in this class.”
Nico Menzel (#35 BMW M6 GT3, Walkenhorst Motorsport): “SpaFrancorchamps is no doubt one of the most difficult 24-hour races. More than 60 GT3 cars will compete, which can all drive at more or less the same level
throughout the classes. This level of performance is a trademark of this race. So,the goal is to do a good job and not make any mistakes. There isn’t much to say about the track itself – it is simply sensational.”